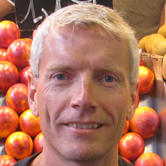 The book Economics by Example by David A Anderson provides valuable insight into the very relevant real world economics which is having such a huge effect on the world. If you've ever wondered how economics relates to you, this is the book you need to read. This is a practical book, providing interpretation and access to the essential drivers of modern life.

1. You've certainly picked the right topic for the times. Do you believe the public has an adequate understanding of the real economic issues, and could you give an example of how your book could be applied to understanding the huge financial disasters of 2007-2009?

The headlines of today emphasize the Federal Reserve's struggle with low inflation and low job growth. Yet the tools they have to work with are not explained in the news, which leaves readers to wonder what can be done and how likely the remedies are to succeed. Chapter 22 of Economics by Example describes monetary policy in simple terms so that readers with interest can better understand the Federal Reserve System and the potential for monetary policy to help pull us out of the Great Recession.

2.The introduction piece, What's to love about economics, is a good question for most people, who see economics as much as a semi-comprehensible threat as a science. What's your primary objective in this book, to act as an interpreter, to flesh out the bare bones of economic theory, or to make a specific point to readers?

Economics by Example is meant to demystify economics as a discipline and clarify how it envelopes our daily lives. Rather than being all about money or business, economics is the study of scarcity and choice, and with virtually everything being scarce, the lessons of economics apply to most everything we do.

Job growth hinges on consumer and employer optimism. If employers fear stagnation in the economy, or consumers feel the need to save more money for a rainy day, purchases aren't made, companies run on a skeleton crew, and the feared stagnation is created by the fear itself. Optimism is likewise a self-fulfilling prophecy: as we gain confidence about the economy, we will make the purchases and hires that put money into people's pockets and allow the economy to grow. Thus, the economy will turn on hope, which can be provided by leaders, the Federal Reserve, or the populace, but as of mid-2010 the attitude is one of very cautious optimism.

5. Public Policy is a subject which baffles most people, particularly those who understand the issues but don't understand the policies. What would you say are the best examples of issues which show people how to read and interpret public policy in economics?

6. If you were to direct someone to an uncomplicated example of normal market decision making, what would you use as the analogy?

Beyond the daily decisions of how many lattes and iTunes downloads to buy, we also decide how much work effort to sell. In the time you have available, will you go to school, take leisure, or provide your labor on the job market?

7. You've certainly hit a nerve with the low-price, low wage cycle in the Wal-Mart: Friend or Foe?: Economies of Scale, Low Prices, Low Wages, and Thinking Outside the Box issues in Part 7 of your book. A lot of people have questioned the sanity of a situation in which income spending power for a huge demographic is effectively decimated, particularly when money needs to be flowing through to business. Can you give a simple paradigm which explains your perspective(s) on this issue?

The trouble with Wal-Mart is that corporate power is used to suppress wages and payments to suppliers, and to bring prices below their cost (including environmental costs) to society. So we find ourselves over-consuming resources while simultaneously creating too few good jobs.

As we convert to clean energy (solar, wind, geothermal, hydroelectric), adopt efficient transportation (trains, hybrid-electric cars), and work to remove the environmental threats of pollution and greenhouse gasses, a great many good jobs will be created. Imagine the employment repercussions of placing solar panels on every rooftop or building a high-speed rail system in the United States to rival those in Europe and Asia. Innovations for the home, including dual-flush toilets, solar-thermal water heaters, geothermal heat pumps, and waste-disposal systems will provide similar opportunities for a higher standard of living accompanied by job growth.